The Manhattan Project Gave Us Pop-Tarts

The other day I was researching the effects Pop-Tarts might have on my unborn child. I was hoping to find things like:

Apparently, no research has been done on any of that. Obviously, our economy is still going downhill if important Pop-Tart experiments aren’t being performed.

What I did stumble across was this. A Pop-Tart-hater site.

If this is wrong, I don’t wanna be right.

This site claims the following:

Most importantly, frosted Pop-Tarts are not suitable for vegetarians, as they contain gelatin.

Lies! Lies, I tell you! All of this is mere propaganda probably spread by the folks at Toaster Strudel.

Favorite Comment From Last Post: “Wait a minute. No sober person has ever eaten a pickled egg…except now, you, pregnant, eat pickled eggs. Soooooo…pickled eggs where drunk people and pregnant people intersect, but they aren’t allowed to be the same people. I made a really cool Venn Diagram to illustrate this, but I can’t save it.”—Omawarisan

Once the Door Is Open

Before I was pregnant, I started reading a blog written by a newly pregnant woman. She’d just found out she was pregnant, and it was cool to follow her on her new journey.

But I noticed something about her posts. She wrote about poop. A lot. Apparently, when you’re pregnant, weird shit happens. Literally.

And I swore when I was pregnant, I would never blog about poo. Because that’s yucky. And because girls don’t poo.

But you know what? I’m allowing myself one pregnancy poo post. Why? Because it’s funny.

While Kiefer and I were in Greece….

Kiefer: Are you ready to check out?

Thoughtsy: Yep. Go ahead down, and I’ll meet you there.

Kiefer: I can wait for you.

Thoughtsy: Awwww…that’s sweet. But I have to go to the bathroom.

Kiefer: You pee a lot.

Thoughtsy: No. I have to go to the bathroom.

Thoughtsy: In the 5 years we’ve been together, I’ve yet to go #2 while you’re around, and I’m not about to start now.

That was me opening the door. Figuratively. Not literally.

I can only pray that I never literally open the bathroom door. After a 9-week ultrasound, this happened:

Thoughtsy: All my clothes are tight. Stupid baby bloat.

Kiefer: You mean all the pooping?

Thoughtsy: What? ::pause:: I have no idea how to recover from that question.

Not often is Kiefer able to catch me unawares. But he did, and I have only myself to blame. But I refused to let him win; I could take him. Not able to come up with something clever, I had only one option: give him too much information.

I thought he might make the obvious “you’re-full-of-it” response, but he didn’t. Ha! I won!

Or so I thought. Once we got home, I started eating a cheese stick.

Kiefer: You know that’s not going to help your problem, right?

Ladies, guys are just always going to be better with the poo comebacks. Don’t fight it. And for goodness sake, don’t open the door.

Are You Trying to Kill Me?

Right before I left for Greece, my coworker Ddot relayed a crazy pregnancy story about his wife.

When she was pregnant, she spent a lot of time on bedrest. One time while she was upstairs, she called downstairs to Ddot because she was hungry.

Ddot: I just finished up the dishes. Want me to bring up some of the ham we had yesterday?

Ddot’s Wife: Are you trying to kill me? ::begins crying::

Hormones are crazy things. While he comforted his wife, he asked her what she wanted instead. Her answer: a Whopper…with cheese.

I found the story hilarious and relayed it to Kiefer…and it became the tagline for our entire Greece trip.

We spent our time in Athens and on the island of Milos. And I learned a lot, such as… 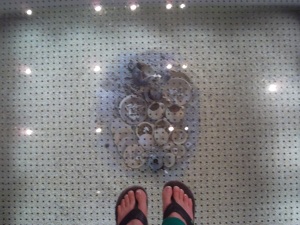 Favorite Comment From Last Post: “I saw Home Alone as an in-flight movie once. When it was over, a kid got up and very carefully arranged a bunch of little toy cars in the plane aisle.”—Laura

I just returned from Greece last night, so while I’m reacquainting myself with East Coast time, here’s the conversation Kiefer and I had the day I left for Greece. I’d never flown out of the country before, so I was really nervous.

Kiefer: I’ll give you money. And I’ve already set up a tour of the city for you because I don’t want you wandering around alone. And if you’re too tired, you can hang out by the pool or get a massage. I work one day, and then I have everything else planned out.

Kiefer: ::after giving me detailed instructions and confirming that he’ll pick me up from the Athens airport:: So I’ll see you in less than 24 hours. I love you. Have a good flight!

Thoughtsy: I love you, too.

Thoughtsy: Are you sure you can’t just fly back here to the States really quickly, and then we can take my first international flight together?

Kiefer: You’re going to be fine. And you’re flying through London…where you speak the language.

Thoughtsy: But sometimes the Cockney throws me off.

Kiefer: You’re a dork. Call me if you have any problems.

Thoughtsy: What if I have a problem on the plane?

Kiefer: That’s what flight attendants are for.

Kiefer: You’ll be fine. You’re stronger than you think. I love you. Bye!

Thoughtsy: I love you, too.

::pause and then texting::

I can’t believe you hung up.

How Zeus and I Will Become Besties

The first thing on my 35 Before 35 List is “Learn a new language.” In addition to American Sign Language, I’ve been learning Greek.

And last but not least, because I’m going there to meet Kiefer…right now.

See you in a week!