Operation Pickle Juice Is a Go

Next up will probably be, “You’ve hit 40 weeks. I’m sure she’s staying in another week or two. We have time.”

The only thing Kiefer isn’t procrastinating on is getting a new car. My 2-door Civic isn’t going to work once the baby arrives. It barely works now when I drive with Boo and Radley.

We have 7 weeks left. Seven!

To shake him up a little, I decided to take Darla’s suggestion and implement Operation Pickle Juice.

If I give him a shot of Jameson before and immediately after, I think my prank will be better received by Kiefer.

Only one question remains: Should I use Dill or Bread and Butter pickle juice?

Please free to leave SUV suggestions in the comments.

Favorite Comment From Last Post: “We don’t have any unicorns in our neighborhood, so I tried recipe #1 with my cats. The results were disappointing.”—Laura

That Was NOT a Honeymoon

When you visit Greece a month before your wedding, everyone asks if that was your honeymoon.

When you’ve waited as long as Kiefer made me wait, you get as many trips as you want. So we’re doing two honeymoons: one just Kiefer and I after the baby is born and another with Boo and Radley.

Our family honeymoon is this week. We’re headed to Florida to visit some friends, SeaWorld, and the Tampa Aquarium, where we will hopefully see Pete the Penguin.

Who is Pete the Penguin?

A penguin Kiefer got me when he went to Africa a few years ago.

I’m in Cape Town today visiting the penguins, and I thought of you because you love penguins. I’m going to try and smuggle this little guy back for you.

I’m not ready to marry you yet, but I am willing to commit to raising this penguin with you. Let’s name him Pete. Pete the Penguin. We’ll get him a butler suit and teach him to serve cocktails just like you’ve always wanted.

Favorite Comment From Last Post: “It is never too early to start teaching about the undead. And I hear braaaaaaains are great for teething.”—KittenThunder

What’s a Wedding Without a Trampoline?

The morning after the wedding, as Radley was pouring his cereal, he said, “Good morning, Stepmom!”

It was cute. Nothing had changed, yet it had.

The Monday after the wedding at a meeting, I introduced myself as “Thoughtsy Appear.” My coworkers responded with “Who is that?” until I corrected my name to “Thoughtsy Sutherland.”

But I think the best (i.e., worst) title slip-up took place just a couple days after the wedding.

Kiefer: I guess I can’t call you my fiancee anymore.

Thoughtsy: Oh…right…because we got married Saturday. Oops…I knew that.

We didn’t have a trampoline at our wedding. That’s my excuse for forgetting.

I swear my natural hair color is not blond.

Sorry, Kelso. You have some competition.

Favorite Comment From Last Post: “Maybe if you just went all sports bra, all the time, Kiefer would leave your SuperUniBoob alone?”—GoJulesGo

Identity Theft at Its Finest

Last week I went to the local Social Security Administration to get a card with my new last name.

Itwas great people watching. A man told the security guard he was stepping outside to smoke because smoking inside would damage the electronics. Seriously? How about damaging my lungs?

My favorite was a middle-aged Russian woman.

If you’ve never been to the SSA, just imagine your local MVA. You get a number and sit around waiting to be called—hopefully before you die from starvation. Two signs are posted everywhere:

So what does the possibly Russian lady do? She asks the security guard about numbers being called out of order of course.

Security Guard: Ma’am, sometimes numbers are called out of order. I’m sure you’ll be called soon. The person who will help you is probably just finishing up with someone else.

Lady: But my appointment was 20 minutes ago.

Five minutes later, the lady and the security guard run through the same conversation.

A few minutes later, a worker steps out and calls a name.

Maybe the worker pronounced “Bueller” wrong, or maybe the lady was hard of hearing, but that seemed sketchy. The lady didn’t know her own name. Am I the only person who sees that as a red flag?

Favorite Comment From Last Post: “If only you had kept your legs together, Thoughtsy, we wouldn’t be in this predicament! Ps. YAY secretly I hope it’s a girl too. Boys = gross.”—Daile

Only one thing stinks from Kiefer and I’s wedding: no pictures…yet.

We tried to keep our wedding on a budget, but we splurged on our photographers. They edit every single photo and then give us ALL of the photos.

But we won’t get to see those photos for a couple months. Lucky for us, our friends took some pictures.

Here are the highlights:

Boo walked me down the aisle. 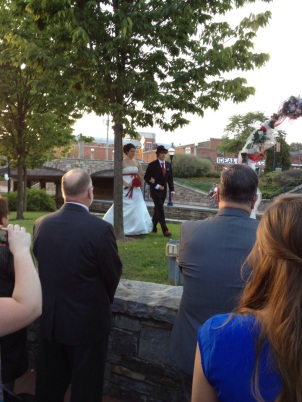 Kiefer and I said our vows, and then we joined hands with Boo and Radley for some family words. The officiant said something along the lines of “May your life be full of…,” which ended with  Radley adding, “And lots of sweets!”

Of course. there was a kiss.

The boys exited with a jump… 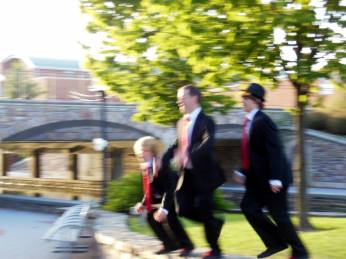 And then I took a more graceful exit.

Favorite Comment From Last Post: “I remember my wife, when she was 8 months pregnant, bursting into tears and angrily telling me I could go off with THAT WOMAN if I REALLY WANTED TO. I’d just ordered some drinks from the barmaid in the pub.”—RuralSpaceMan