When I first started dating the Cupcake Dangler, I had to come out of the blog-closet to him:

CD: How long have you been blogging for?

Thoughtsy: Awww…. That’s so cute that you want to read it. But you can’t. Not now. Maybe not ever.

To soften the blow, I offered to let CD pick his name. That was a mistake.

CD: How about Lance?

Thoughtsy: Isn’t that a Backstreet Boy? I mean, NSync. You’re not allowed to pick your blog name anymore. You can’t be trusted.

How could I be with a guy who possibly secretly liked boy bands?

Then…he bought me this cupcake. (Translation: I snuck it into his grocery cart, and he pretended not to notice.)

Two desserts. In one dessert! I thought the tables had turned in his favor.

Then he suggested we split it. Split. It.

Which is pretty much the same thing as…

That’s when I first realized I made a horrible mistake. It was the beginning of the end for him.

Haaaaaave you met Peg? I blog crush on her and her Reese’s Cups. (No, that’s not an euphemism.)

Someone who laughs in the face of danger.

Someone who walks straight into a wolf’s den and says, “I’m not afraid of you.”

Someone who loves all things furry.

Favorite Comment From Last Post: “I once went on a date with a guy that I’m sure had his mother in his freezer at home. He spoke to me with his head tilted to the left and didn’t move his lips when he spoke. During the date I texted my BFF, ‘I know that he wants to wear my boobs for a hat, I do not want to be material for nipple beanies!’ I toughed out the comedy show and made a quick getaway. Thankfully he didn’t know where I live. Dating sucks.”—TrippyBeth

Math is not one of my strengths. It used to be. I rocked math until 11th grade. That’s when I took Pre-Calc and Trig, earned my first C, and it was all downhill from there.

I swore off math forever. Well…until I was required to take a math class in college. Then Math and I came to agreement. Math agreed to leave me alone as long as I retained the basic skills needed to balance my checkbook or convert measurements for baking. After that, we shook hands and went our separate ways.

When the Accidental Stepmom announced her Pi Day Pie Challenge, I decided to let a small slice of math back into my life.

May I present to you…my Pi Day Pie.

The recipe came from NanaBread. But the center decoration  of Cherry 3 Musketeers was all my idea.

I hope I didn’t go overboard on the syrup.

I may have added even more chocolate syrup after this picture was taken.

There’s till time to submit your own pie! You have until midnight tonight!

Blogs Are My Psychiatrists

When I get upset, I have trouble doing anything except fuming and then tearing up. I’m constantly telling my 31-year-old self, “Use your words, Thoughtsy.”

But you know what’s even better than using my words to describe how I’m feeling? Using your words.

I Like Boys Who Wear Glasses: Do you really mourn the person you lost? Or do you mourn losing the person you thought he/she was? When you look at it critically… Isn’t what you really lost your dreams, your hopes, your wishes for the future?

I left Kiefer because I lost hope. And I’d reached a point where I needed more than hope.

Simply Solo: But you ARE the one for some man out there, and the more time you waste with the guy who’s not sure, not ready to take the plunge, the more time you will spend in silent heartache. You are not an impatient woman for wanting to be married.

I want to get married. And the guy who doesn’t want to marry me? He isn’t the right guy for me.

Most of Kiefer and I’s relationship was easy, and I think that’s why it lasted so long. We hardly ever argued or had any conflict. And when we did, it was always about his commitment issues.

Cocktails at Tiffany’s Interview with Just Married Girl: “The first time someone shows you who they are, believe them.”—Maya Angelou

Izzie Darling: “If you see a red flag, don’t try to make it magenta. What you see is the way it is. Believe it and act accordingly.”—Magnolia Miller

Favorite Comment From the Last Post: “…If you run into that lady again, as soon as she leaves do that ‘crazy person’ thing where you whirl your finger around your ear and then point at her. No explanation necessary.”—So I Went Undercover

After visiting my little brother in LA, I’m flying to the East Coast, and approximately 14 hours later, I’m headed back to the West Coast for work.

The following search terms brought people to my blog: 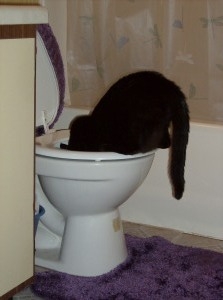 Have a great week!

What’s the funniest search term that’s brought someone to your blog?