Tag Archives: how to

This Is How My Dog Learned to Eat Shoes

Remember back at the beginning of pregnancy when I complained about constantly having to buy bigger bras?

Yeaaaaaah…I had to do that again. But that’s not what this post is about.

As in my feet were swollen, not that my boobs were so huge that they touched the floor.

One day I walked around the office in little black bootie/ballet socks and praying that no one would realize I wasn’t wearing shoes. After that, I stole Kiefer’s PF Flyers and wore those to work. Since they’re all black, no one noticed I was wearing sneakers.

My ankles were nearly nonexistent, and every pair of shoes I owned (including the new bigger and wider ones I just bought) were pinching my feet.

I cursed myself for giving Ozzy the most recent shoe box so I couldn’t return the new shoes.

Everyone always posts pictures of cats and boxes, but no one posts about dogs and boxes. In case you were wondering what dogs do with boxes, let me put your mind at rest.

Step 1. Inspect the box for any strange odors. 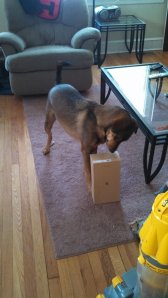 Step 2. Determine if the box contained food…or is food.

Step 3. Taunt the cat with the new toy box.

Step 4. Determine if the box is indestructible.

Step 5. Destroy the box…but look cute while doing it. 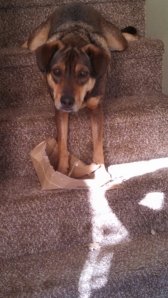 Favorite Comment From Last Post: “My life with a newborn was very similar. We put our daughter in the crib the first night and then told her how to work the TV remote and to help herself to anything in the fridge if she woke before us. We were very surprised when she was up….15 minutes later.”—The Waiting

My New Car Is Every 16-Year-Old Boy’s Dream

The two cars I’ve owned had only two doors. Since it was just me, I never needed a car with four doors.

Don’t judge. It was all uphill, a little snowy, unwalkable in heels, and no one looks cute bundled up in winter gear. Also…

So all nine of us piled into my Ford Probe. Which was this exact one.

Alas, those days are long gone. Strapping a baby into a carseat in the back of a two-door with one tween and one teen (who is now taller than me) seemed like a no go.

So Kiefer and I bought a grown-up SUV.

Or so I thought. My grown-up car has mood lighting.

How To Get In Someone’s Pants: Use blue mood lighting.

I may have just bought every 16-year-old boy’s dream car.

I’m totally going to get some.

On New Year’s Eve morning, I had no idea what to bring to the party Kiefer and I were going to. I thought of just making a good standby recipe, but…I have a reputation to uphold.

Imaginary Conversation with Friend: “Oh. You made Orange Dreamsicle cookies…again.”

A cookie so colorful, so glittery, so sprinkley—it was perfect! 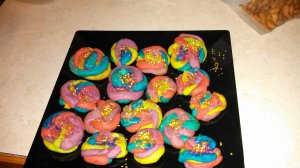 We used some star sprinkles. I wish I’d taken a closeup.

Boo and Radley are now expert unicorn poop baggers if you’d like to borrow them. You’ll have to pay them, of course, since there are child labor laws. They would probably accept cookies as payment.

You can do it however you want, but the first scenario has less clean up and involves a real unicorn. Just sayin’….

Favorite Comment From Last Post: “No, he did not call you fat, of course. He called you PHAT. That’s street for totally bitchin’, or so I’m told.”—Pegoleg

34 Comments   |  tags: Boo Radley, cookies, Food, how to, Humor, Life, Sprinkles Are Made of Crack, unicorn | posted in Food

How To Turn Your Dog Into a Zombie Killer

Since I’ve been pregnant, Ozzy Pups has gotten…well…protective.

My sweet pups who wanted to greet everyone is now my personal bodyguard.

Any suggestions on dealing with a pregnancy-protective dog would be much appreciated.

We’ve tried to channel Ozzy’s protectiveness. Specifically, we’re training him to only protect us against zombies.

Here’s how you can do that.

I suggest this zombie foot.*

Kiefer will lead you to believe that long cylinder-shaped neon green toy is NOT a dog toy. I assure you, it is.

Step 2: Work your way up to an entire zombie.

I suggest Undead Fred.** Say things like, “Where’s your zombie?” so the dog learns the terminology.

See how Ozzy befriends Undead Fred and lures him into a false sense of security. Ozzy can now infiltrate the zombie ranks.

Step 3: Show your dog an episode of Walking Dead.

This shows your dog the true nature of zombies and what we do to them. Then say, “Where’s your zombie? GET IT! GET YOUR ZOMBIE!” 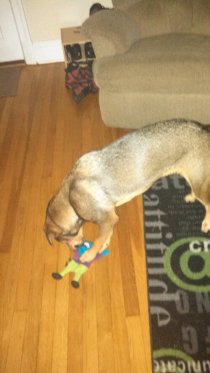 My name is Ozzy Pups. You are a baby-eating zombie. Prepare to die.

Ozzy choose to eat Undead Fred’s mouth—the most dangerous part—and then rip out the brains, so other zombies will assume it was a case of zombie cannibalism.

*The zombie foot and Undead Fred came from ThinkGeek.

Doctor: We made a mistake.
Me: Oh s#^t there’s two in there, isn’t there? (In my defense, I was huge)
Doctor: Nope. But it’s not a boy.
Me: Crap. Everything’s blue and there are way too many baseballs.—LauraLord

How To Fluff Your LoveSac

For Blarney’s dog Murphy…. RIP. I miss you. You were the best stick-fetchin’, LoveSac fluffin’  little guy.

LoveSacs are the best, most comfy pieces of furniture ever. Ev-er. But they’re lazy, so it’s up to you to keep them fluffy and in shape. 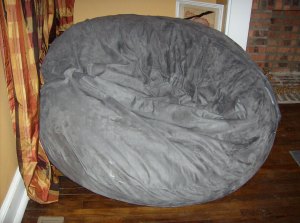 Step 1. Charge the LoveSac while screaming, “I’m gonna get you!” Maybe give a little roar or turn green Incredible Hulk style. 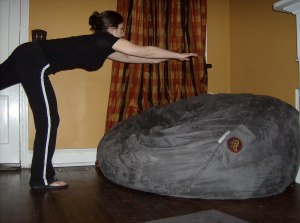 Step 2. Then change your strategy. Hug it. Everything needs hugs. Even inanimate objects. Baby talk helps: “You cute, wittle LoveySacky, come here, bring it in.” 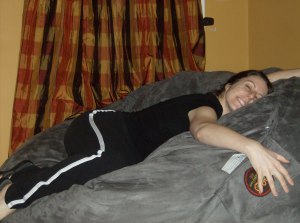 Ewww…look at my hand. Is that webbing between my fingers?

Step 3. Back away from the LoveSac slowly so you don’t startle it. If you startle it, it may squish you.

Step 4. Change your tactic again. This keeps the LoveSac on its toes. Wipe that smile off your face. Crack your knuckles or maybe flex your guns. Anything intimidating.

Not being intimidating leads to squishing: 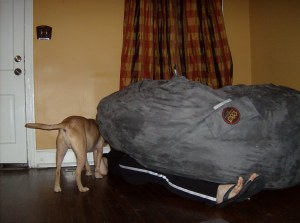 Step 5. Get a running start and fling yourself on top of the LoveSac.

Your butt will probably get a little dirty as shown here. Do these pants make my butt look big?

Repeat all six steps as many times as necessary.

Caution! Be sure that all pets (and small children) are clear of the LoveSac, or the faceplant step may occur earlier than planned.

Jumping onto the LoveSac while a small animal is resting causes the pet to launch.

And then you have to go stand in the corner.

12 Comments   |  tags: Animal, Blarney, Do These Pants Make My Butt Look Big?, how to, Humor, Life, Murphy | posted in Animals