Scout looks absolutely nothing like me. She might have my hair, but Kiefer’s hair is darkish, too, so it’s hard to tell.

If I hadn’t been in labor with her for nearly 30 hours, I might question that she was actually my child.

But the other day, this happened:

And it reminded me of this: 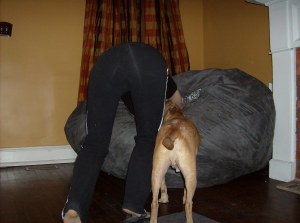 Look familiar? Are you looking at my butt? Because that’s not what I meant. Scout’s wearing a diaper, so you can’t really compare our butts.

We both love giant beanbags!

You’re still looking at my butt, aren’t you?

When You’re Not Allowed to Ask for Help….

Kiefer recently returned from a 2-week trip. That means it was just me, Scout, and Ozzy ALL the time. Plus Boo and Radley for a couple nights.

Whenever Kiefer leaves—as in within minutes of him getting on the plane and turning off his cell phone—Boo and Radley’s mom calls.

Their Mom: Can you keep the boys tonight/tomorrow night/whenever?

Forget that I already have plans or have nothing they’ll eat for dinner or was really just looking forward to sitting around pantsless.

This happens for each of Kiefer’s trips…multiple times a trip. To the point that I felt like she knew I wouldn’t say no, so she was taking advantage of the situation.

Two weeks is a long time to not see Boo and Radley, so it’s nice to see them while Kiefer’s away.

But it’s not so nice when I have to pick Radley up from school, take Scout for a drive to nap because she’s transitioning from 3 naps to 2, have to pick up Boo from basketball practice, and make dinner. And the last three things happen in the same 45-minute period.

I need time to mentally prepare myself for that kind of craziness. Not an hour’s notice.

To avoid me having a breakdown while Kiefer was away, he sent his ex an email with the days the boys would stay at our house.

Cue nastiness. She got angry. Said the boys didn’t have to stay there at all and that she could just keep them the whole time.

When the first day rolled around that Boo and Radley were supposed to stay with me, I wasn’t sure if they were coming or not. They came. It was a jam-packed night, but we made it through.

Remember what it was like with your first baby? Remember that you had no idea what you were doing? Remember when you would take the baby for a drive because it-just-won’t-nap-and-you-just-want-to-take-a-shower-dang-it?

Now throw in two other children—who are yours, but not yours. You’re a stepmom, and you really don’t want to lose your patience or temper (SHHHHH! The baby is SLEEPING!) with your stepchildren lest they start dubbing you the “evil stepmother.”

I’m a new mom. I’m a new stepmom. And I’m new to single-parenting…even if it’s only for 2 weeks. All I’m saying is…I need some help, some notice, some understanding.

PS: Kiefer’s next trip is next month, so please reread this letter in January.

Oh Where, Oh Where Can My Baby Be?

Please return my baby. My perfect little baby who…

Don’t be fooled by the cuteness. This IS a future pod person.

The pod baby you see above is not as easy going as my baby. This pod baby nurses to sleep, wakes up an hour later, must fall back asleep on me, and then wakes up every time she goes back into the crib, so I finally give up and bring the pod baby into Mommy and Daddy’s bed where the pod baby decides every few hours that she must sleep on me, not next to me.

And, of course, I get no sleep because I’m convinced I will either roll on said pod baby or roll over while the baby is on top, which will send the baby onto the floor.

I was willing to take care of the pod baby until my husband and I had this conversation:

Thoughtsy: When does the teething stop?

Kiefer: I think they have all their teeth around 2 years.

So there you have it. Just when I thought sleep was once again mine for the taking, I find out there’s another year and a half of no sleep.

At night, Scout likes to sleep, but she wakes up every 3-4 hours to eat. She’s been that way since we brought her home from the hospital…until about a week and a half ago.

2:27 AM: Wake up and realize Scout has been asleep for 6 hours straight! Jump out of bed to see if she’s breathing…she is.

2:31 AM: I realize my boobs are about to explode. I contemplate waking her up, but decide to pump instead.

2:40 AM: Pump only a little because I’m sure she’ll wake any second.

And that’s why I always get less sleep than Scout.

And Two Tylenols Later, A Baby Was Born

Guy in Childbirth Class: So…do you think my wife could just take a couple Tylenol and be ok through labor?

I wanted to smack him. Partially because earlier he insisted his punctured spleen from a car accident a couple years ago never really hurt.

I have a pretty high pain tolerance.

Translation: I cry only a little when I slowly peel off a band aid.

Taking this off will be a doozy.

Real Translation: Because needles freak me out, I won’t let the dentist numb me when filling cavities.

I’m that person nearly passes out at blood draws, and afterwards I feel stupid because I didn’t even feel the needle.

I wish that had been an option. It actually said…

After laboring at home for 15-16 hours, I decided it was time to go to the hospital. When I got there, I was 7 centimeters dilated…and every nurse seemed concerned I was about to give birth in the hallway, so I asked for drugs that last an hour, hoping that was all I would need.

That resulted in me telling everyone that I made the staff red velvet cookies, and they should get one from the nurses station.

And after that sweet hour of mild relief with barely any more dilation, I asked for the epidural.

Kiefer: Are you sure you don’t want to try walking around first to see if it speeds things up?

When you say someone’s name, they know you mean business.

When the anesthesiologist came in…

Anesthesiologist: How are you doing?

Unfortunately for me, the baby hadn’t come out yet, so I wasn’t actually done.

One epidural and 3 hours later, I was 10 centimeters dilated with a bag of water still in tact. The midwife popped it, and we got the show on the road.

Then I noticed that I could see my legs and stuff in the reflection of the lamp light. I think that’s when my coochie snorcher decided it was done despite the baby still being inside.

Scout finally arrived after nearly 29 hours of labor. The last 5-10 minutes was extremely unpleasant—I’ll leave it at that.

38 Comments   |  tags: Are You Trying to Kill Me?, Baby, Band-Aids and the Pain They Inflict, cookies, Family, Humor, Kiefer Sutherland, Life, Movies, Music, People I Want to Punch in the Face, Scout, The E Word | posted in Baby