I Am Thankful for a Cat Who Sleeps on My Head

This Thanksgiving I am thankful for…

Have a wonderful Thanksgiving! May your gravy boat overfloweth…but not on the good tablecloth.

Run for Your Life! It’s a Killer Turkey!

A few months ago, a Netflix movie perked my interest: ThanksKilling. So I added it to my queue…and waited. Waited until it was nearly Thanksgiving to watch the holiday-themed movie.

I would call this a B movie, but that seems like an insult to Evil Dead. So this is a C movie. Possibly even a D movie.

Uh…yeah…. When this movie started, it was so bad that it was good. But the Killer Turkey having sex… ::shudder:: That ruined it for me.

And I was just about to turn it off when I saw this: 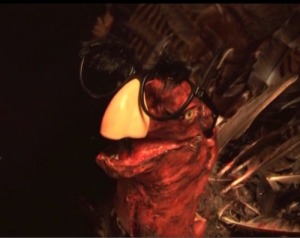 Don’t be fooled. This is a Killer Turkey in an excellent disguise.

Then it got even better. The college girl mistakes the Killer Turkey for her dad.

Have a wonderful Thanksgiving! And beware of killer turkeys!

Favorite Comment From Last Post: “The repetition of the line ‘I know exactly where we are’ was like a car ride with Mr T. So was the need for Dramamine.”—ThyPolar’s Life

How To Do the Turkey Trot in 13 Steps

Just to clarify, the Turkey Trot is a 5k, not a dance.

Thanksgiving morning I ran the Turkey Trot. Why? Because I’m insane obviously.

Because I wanted the freedom to have as many desserts and carbs as I wanted on Thanksgiving. And because I needed to cross off #31 from my 35 Before 35 List. And because the registration fees help people with mental illness.

I followed How I Met Your Mother‘s Barney’s marathon advice: Don’t train, just go out there and run it.

Someone ran it in 15:22. That’s insane. He must have eaten sugary cereal at each mile to keep the sugar high boost.

Children of the Candy Corn

While searching for Thanksgiving movie to watch for Movies Teach Us, I ran across Children of the Corn 7. Corn means Thanksgiving, so I decided it counted as a Thanksgiving movie. Or maybe I’m just getting the last of Halloween out of my system before diving into Christmas.

I had seen a preview for a new Children of the Corn movie, and it looked scary, so I gave this one a try.

When you put Revelation in the title, make sure it’s the last movie, just like the Bible. I’m not sure if you’ve ever heard of the Bible, but Genesis is at the beginning. Please number your movies to avoid further confusion.

Also, with 8 Children of the Corn movies, maybe you could change it up a little and make it more modern. Maybe use candy corn instead. But then I guess you can’t have corn stalk monsters. But you could have people suffocate themselves with the plastic bags the candy comes in.

Oh…but they have labels warning people against that. Maybe stick with the corn stalk monsters. But I guess you knew that already. That’s why you make the big bucks.

Just Say “No” to Pumpkin Pie

I do not love all Pop-Tarts equally.

For example, Pop-Tarts without icing and sprinkles. They’re not my thang.

You want to believe you’re healthier by skipping the icing? You’re not. Frosted Pop-Tarts have less calories. For those of you who shoved your fingers in your ears and started singing, I won’t judge you.

I won’t even judge those of you who feel chocolate for breakfast is just too early. Amateurs….

Although I love chocolate ones, I don’t discriminate against the fruit ones. Except the grape ones. Ewww.

But this…this is an abomination.

The Pumpkin Pop-Tarts were around last year, and I was hoping they would be gone this year…like dust in the wind. No such luck.

But you can make a difference.

I’m pleading with you to skip the Pumpkin Pie Pop-Tarts. For just a few dollars during your next grocery store trip, you can bring a smile to my face.

Together…we can make a difference.