Would You Like to Try My Schweddy Balls…Ice Cream?

Before you click away in disgust because I keep typing the word balls, hear me out. Schweddy Balls (I just said it again!) is the new Ben and Jerry’s ice cream flavor inspired by a Saturday Night Live skit (which you can watch here).

A few weeks ago, some friends said they tried Ben and Jerry’s new Schweddy Balls ice cream. And so began my search for the holy balls of ice cream….

I tried about 4 different grocery stores. Nothing. (I did buy the BJ’s Red Velvet Cake ice cream…Yum!)

And just when I was about to give up hope, just when I thought Schweddy Balls would never pass my lips…. Last night I swung by the local Ben and Jerry’s Scoop Shop.

This is where you think, Why didn’t she start there? To that, I say, SHUT UP!  Seriously though…I was distracted by the thought of chocolate-covered balls.

It’s vanilla ice cream with a hint of rum, and it has malted milk balls and chocolate-covered rum balls.

Without further ado, here are my balls: 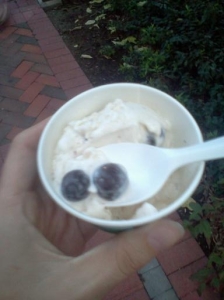 And how did such a sweet, innocent lady like myself order the ice cream with the racy name? I waited until someone else ordered Schweddy Balls, and then I said:

I’ll have  what he’s having…only in a cup.