That’s right. I said it. At midnight I was tucked away safely dozing in my bed.

Going to a crowded bar, being squashed against complete strangers, and waiting forever to get a drink is not my idea of fun.

And I can’t watch the ball drop on television because watching TV rots your brain.

My idea of a great New Year’s Eve is dressing up, going out for a couple hours, and then coming home and changing into my PJs around 10:30 or 11.

Anyways…Here’s what I learned from the movie:

Unless you’re me. Then it’s about sleeping.

One Little Puppy Jumping on the Bed

And the clouds parted and Kiefer said, “Let there be no cats on the bed….”

That worked out so well. Not.

So Kiefer tried again. In an extra stern voice, he proclaimed: “The puppy is only allowed on the children’s beds.”

Then it got cold outside. And to keep warm, Ozzy wanted to snuggle with his mommy. Only…she was in the adult bed.

After Kiefer let Ozzy out one morning around 6:00 AM, he made a break for Mommy, scaling the walls of the adult bed to cuddle…in the dead center of the bed. 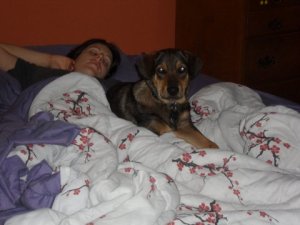 Ozzy: The bottom corner of the bed is still available.

Kiefer: I feel like a third wheel. Where am I supposed to lay?

Thoughtsy: Consider this training for Ozzy sleeping with the boys.  Then they can be the ones to let him out at 6 in the morning, and we can sleep in.