Tag Archives: Falling to My Death

This Is as Graceful as I Get

On Sunday, I tried something I’ve never tried before. I took an aerial fabric class.

It was awesome! We learned several different climbs, positions, etc.

But you don’t have to make it to the top to do some fun stuff.

Thoughtsy: How far up am I now? Should I look down? 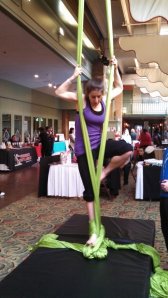 Thoughtsy: I think I’m tangled. At least I’m 6 inches off the ground.

Oooo…so this is how it’s done.

Now, if you’ll excuse me…I need to spend the rest of the week icing my arms and abs.

Favorite Comment From Last Post: “Time to Die! I’m going to start using that as my response whenever anyone asks me what time it is.”—JM Randolph

28 Comments   |  tags: Falling to My Death, Fitness, Humor, I Can Fly, I'm Sexy and I Know It, Lesson in Awesomeness, Life, Spaghetti Arms | posted in Life

I Believe I Can Fly

After years and years of searching for Tinkerbell, I finally found her…in LA. She has a vacation home there for when she needs a break from Neverland.

As soon as I saw her, instead of politely introducing myself, I reverted to my  4-year-old fairy-loving self, and I snatched her up between my hands.

What can I say? I panicked.

Then she bit me…which caused my cupped hands to open. And she flew away. I shouted an apology after her.

But on my hands, she left me some fairy dust, which I used to do this: 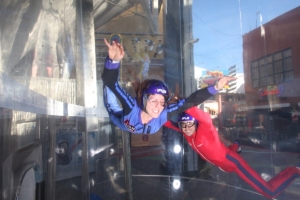 I have absolutely no desire whatsoever to jump out of a plane. I’d be that person whose hands have to be pried off the seat…and then again off the door of the plane…and probably again from the instructor’s neck.

But indoor skydiving…that was awesome!

The instructor said I was a natural: I had perfect posture, he said. Which is why he flung me 20 feet up in the air and spun me around in circles on my first flight.

When I came back down, I may have checked the crotch of my flight suit…it was dry. Phew!

Favorite Comment From Last Post: “Oh come on, Thoughtsy. Admit it…you’ve been walking around LA in see through panties. You can’t fool us! I’ve done posts on my weird ones. Might be time to revisit them. Thanks for the idea. Have fun on the West Sahhhdddd.”—Misty’s Laws

Whatever You Do, Don’t Look Down

I like to live life on the edge…in a safe kind of way.

Jump out of a plane? Hell no! The parachute might malfunction.

But climb a mountain and cross a 200-foot rope bridge? Sure. Why not?

That's not so high.

Last weekend I visited the Nelson Rocks Outdoor Center in West Virginia to do the Via Ferrata despite the following:

Obviously, I also forgot about how I almost died camping because if I had remembered, I probably wouldn’t have added #33. Do something outdoorsy to my 35 Before 35 List. (::Face-Palm::)

You mean I still have more to climb?

In all seriousness, the Via Ferrata was awesome.

Except I’m one of those people who hates to take breaks. While others were anchoring in to enjoy the scenery, I was like, Keep moving! I have a dozen cupcakes to burn off before they settle onto my thighs!

And I was worried that my fingers were frostbitten.

So I’m saying I need to go again…only when it’s warmer. Who’s going with me?