If You Don’t Have Anything Nice to Say…

As I was crossing the parking lot back to my car, I passed 3 older women. Right after I passed them, I heard…

My thoughts: Wow, she sounds pissed off. Is there going to be an old lady smack down?

My thoughts: Uhhh…is she talking about me?

What I Wish I’d Said: Takes one to know one!

I could be wrong, but I’m pretty sure she was talking about me. What the….

I just ignored them because there were 3 of them…and they were bigger than me and had weapons. One of them had a cane, and all I had was a cup of chicken noodle soup.

How rude. Is my sweater dress a little short? Probably. But my ass isn’t hanging out. It passed the fingertip test. 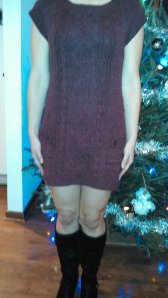 Passed the fingertip test with a couple inches to spare!

Or maybe it was the boots? Is it because they’re knee high? Because they have ties in the back? I always thought they were pirate-like. 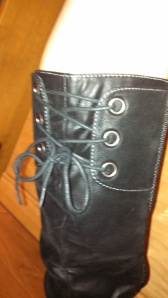 Maybe it was my makeup. I was only wearing mascara, but I did layer it on pretty thick. Two coats.

So there you have it: The new definition of “whore” is having sex with 1 person for the past 4.5 years.

Since when does someone’s clothing reflect their sexual actions? I suppose if I had been raped while wearing it, I would have been asking for it, too.

Grrrr…why are people so flippin’ mean? If you don’t have anything nice to say, don’t say anything at all.

What should I have said? Obviously, I need more practice with comebacks.

I eat lots of sugar. It's the only way to keep up with my new baby and to outrun zombies. END_OF_DOCUMENT_TOKEN_TO_BE_REPLACED
This entry was posted on Tuesday, December 18th, 2012 at 9:59 am and tagged with Humor, Life, Old People Piss Me Off, People I Want to Punch in the Face, Rants, sex, Women and posted in Ewww. You can follow any responses to this entry through the RSS 2.0 feed.
« My Boxing Day Gift List
Ozzy Pups: Panty Thief »