There’s Bacon in My Dessert

You know it’s going to be a good day when you wake up to see any of the following:

That’s right: Yogi Castle is following ME on Twitter. Someone there knows all about the Yogi Castle Chronicles.

So one night this week I’ll be celebrating with Yogi Castle’s new flavor:

And for you other people who like bacon in your dessert, there’s something for you, too. 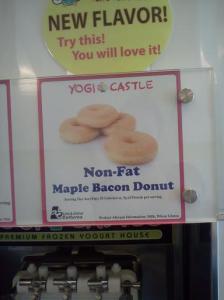 Favorite Comment From Last Post: “What the hell are Peeps??? I’m Australian, so please use words like “beer” or “ale” and also “lager” to describe the treat.”—Captain Sweatpants

So many of the comments on the last post were hilarious. Also check out Ellie Ann’s, and Laurie’s, Queen Gen’s, and Vesta Vayne’s comment thread, which starts here.

I eat lots of sugar. It's the only way to keep up with my new baby and to outrun zombies. END_OF_DOCUMENT_TOKEN_TO_BE_REPLACED
This entry was posted on Tuesday, May 15th, 2012 at 7:42 am and tagged with Chocolate, Coconut Is Crack, crack, Food, Humor, Life, Yogi Castle Chronicles, You Can Buy My Friendship With Ice Cream, Zombie and posted in Food. You can follow any responses to this entry through the RSS 2.0 feed.
« Please Pass Smore Peeps Smores
Beverly Hills 9021-No »

31 responses to “There’s Bacon in My Dessert”