How I Met Ted Raimi and Brian Keene

Now…what you’ve all been dying to know….

No, I did not see Bruce Campbell. I’m a little disappointed, but I met some other cool people. 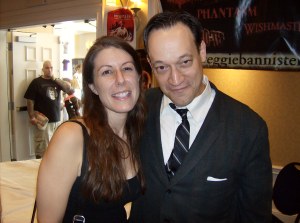 Ted Raimi was in Evil Dead and Army of Darkness with Bruce Campbell, so that’s pretty close.

He’s been in loads of movies, but I think the TV show I’ll always associate him with is SeaQuest DSV. Anyone else remember that show? There was a talking dolphin. And more importantly, Jonathan Brandis was in it. (I crushed on him when I was younger.)

Ted Raimi was so super nice. He let me take a picture with him for free! Why? Because I’m cute. Ok, that’s probably not why. All that matters is the fee was waved for mwah.

An amazing writer that I met was Brian Keene. I’ve only read Darkness on the Edge of Town (which I really enjoyed), but my little brother loves his books. So I bought Lunchbox a comic book signed by Brian Keene. Because I’m the best sister ever.

I’d post the picture of me and Brian here as well, but my arm looked fat in that picture. Not that it looks amazing in the picture above, but it looks worse in the my picture with Brian Keene. And we all know I actually have nice arms. Sorry for my fat arm tangent.

Brian, if you read this, please let me know if you’re available to take another picture. I was also wondering if you’d hire me as your personal assistant…and teach me about how to write since I can never seem to finish anything.

I was also just mere feet away from George Romero. We breathed the same air. I could have reached out and touched him. Literally. And without the help of AT&T.

I eat lots of sugar. It's the only way to keep up with my new baby and to outrun zombies. END_OF_DOCUMENT_TOKEN_TO_BE_REPLACED
This entry was posted on Tuesday, September 7th, 2010 at 7:21 am and tagged with Books, brother, Fitness, Halloween, Horrorfind, Humor, Life, Movies, TV and posted in Movies/TV. You can follow any responses to this entry through the RSS 2.0 feed.
« Squeamy McSqueams-A-Lot
Zombie Exterminators: 1-888-Wuz-Dead »

17 responses to “How I Met Ted Raimi and Brian Keene”